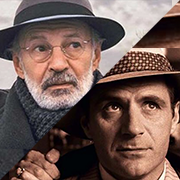 Enduring half a century in our cinema, that has never handled its children with kid gloves, takes not only love and passion for film, but also a strong will. All the laureates of this MFF award have one thing in common: they never gave up acting. Or living, for that matter.

“The art of living and the art of acting are very similar; acting, however, is better, because on stage you can die many times and yet stay alive,” says Mustafa Nadarević, an actor who will always be remembered as the wayward and tragic Leone Glembay from Antun Vrdoljak’s 1988 adaptation of Miroslav Krleža’s play The Glembays.

While he always says he kept relying on his talent only and that he did not started working seriously before turning 30, Nadarević played more than 150 theatrical roles and made more than 60 films in his long career. He also made numerous TV dramas and series with the greatest directors of Yugoslav, Croatian and Bosnian cinemas. As for his iconic film roles, we will mention here but a few: When Father Was away on Business, Déjà vu, The Smell of Quinces, No Man’s Land, Fuse, Days and Hours…

The role of Izet Fazlinović in the TV comedy series Crazy, Confused, Normal marked the past decade of his life and the young generations will certainly remember him by it. But, as he himself says, an actor works as long as he lives, so a long and prosperous future on film is still ahead of him.

Rade šerbedžija, one of the most famous Croatian actors, made a long way from a Yugoslav film star to a stateless person and outcast in the 1990s to the Hollywood stardom. His roles to remember include the one in TV series Beggars and Sons and those in Živojin Pavlović’s films Manhunt, The Deserter, The Red Wheat. šerbedžija’s probably most successful year was 1986, when he won Best Leading Actor award at Pula Film Festival for the Lordan Zafranović’s Evening Bellsand Zoran Tadić’s Dreaming the Rose.

After leaving Croatia, in his London exile, he met Macedonian filmmaker Milčo Mančevski, his great admirer, who offered him a role in Before the Rain. It was a turning point for the famous Yugoslav actor who was stateless and jobless at the time. The film won a Golden Lion in Venice and šerbedžija won a special mention of film critics. The role paved his way to Hollywood, where he appeared in the films of famous directors like Stanley Kubrick and acted side by side with the film greats such as Clint Eastwood or Michael Caine.

From his native Bunić in Lika where he was born, Vinkovci where he was raised, Ljubljana and London where he spent his first exile years to Santa Monica, California where he lived, Brioni Islands where he plays King Lear in his Ulysses Theater every summer and Rijeka where he works as full professor of acting at the local university, Rade šerbedžija has written the emotional and professional geography of his life and of the life of the ex-Yugoslav countries.

Mustafa Nadarević and Rade šerbedžija left an indelible mark in the history of our cinema. Their friendship dates way back to their student days, when they shared a room in a Zagreb student dorm. We will toast them on Motovun Film Hill this summer.