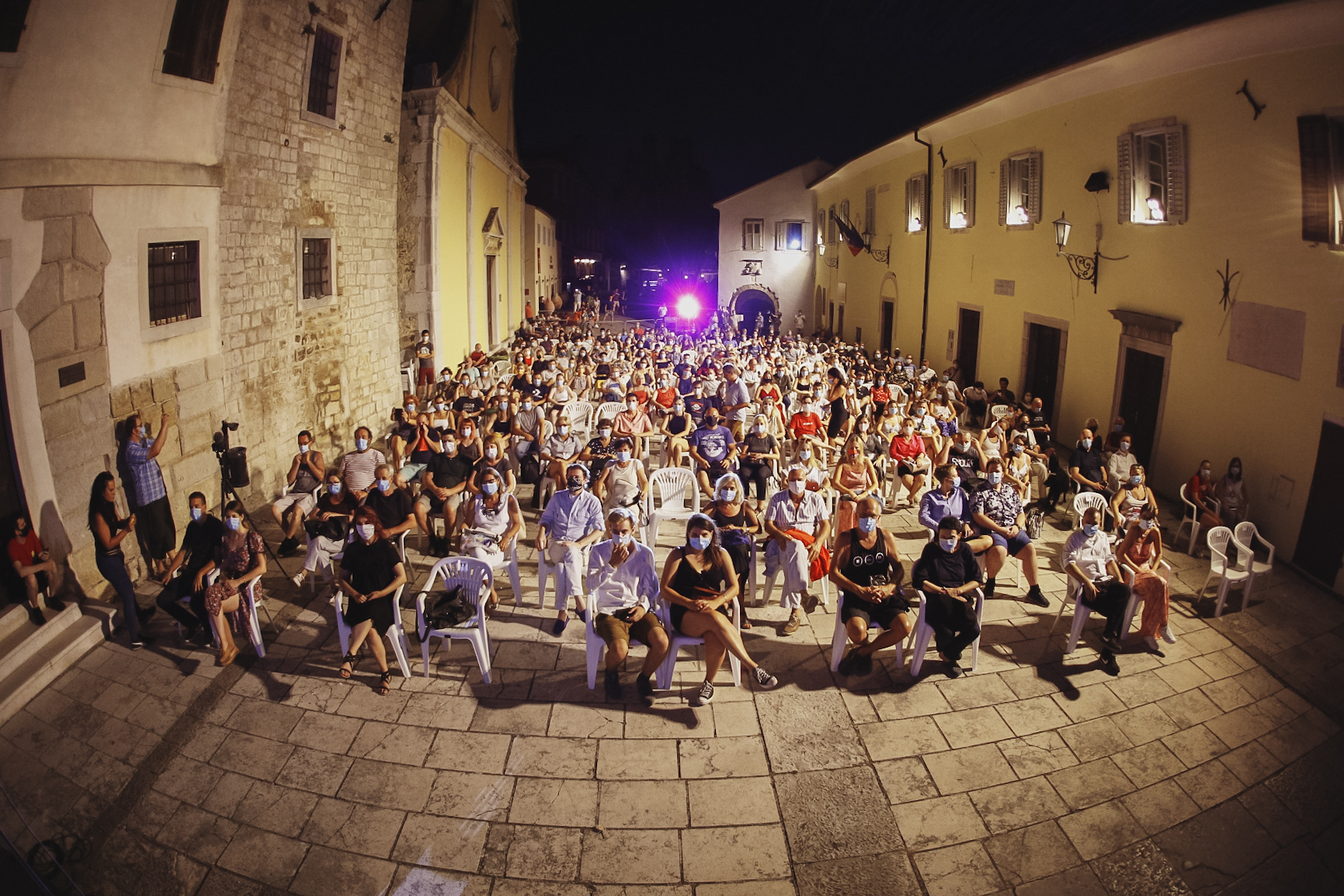 The tradition lives on. Despite the weirdest of circumstances, Motovun Film Festival opened last night with its single screening in Motovun, in front of packed audience in a reduced-capacity venue arranged to meet the restrictions and precautionary measures.

To get an impression of the opening night of the Motovun Film Festival on tour, click here.

“As we often do with the proverbial glass, we may now wonder if the Motovun square is half-full or half-empty tonight. But we know for a fact that our hearts are full now that we’ve seen your support for this year’s edition of our festival,” said Igor Mirković, Motovun Film Festival director, addressing the audience. He thanked all those deserving credit for organizing the screening in such complex circumstances. A group photo of the film crew and audience – all of them with protective masks on their faces – was then taken. “Let’s hope that the photograph with this ultimate fashion accessory will look rather bizarre next year,” commented Mirković.

Then followed the preview screening of Croatian film Tereza37, directed by Danilo Šerbedžija. It is a screenwriting debut of actress Lana Barić, who excels in the role of a woman all of us can identify with. Tereza starts questioning her life and her marriage and embraces her newfound freedom. However, she soon ends up torn between her romantic hopes and the disappointing reality.

The audience warmly greeted the film crew after the screening. Adding to the atmosphere was the fact that the film’s authors – director Šerbedžija and producer Irena Marković – had once worked for Motovun Film Festival. “We are glad that the film’s preview screening was here in Motovun. I am happy to see that the festival is taking place after all and I hope that next year we will meet here again in normal circumstances,” said Lana Barić, who is also a member of the festival jury.

Exceptionally, the traditional toast with schnapps was raised in the opening night instead of the closing night. As a precaution, no glasses with schnapps were distributed; instead, tubes with it were glued under the seats. Hoping that the situation will be better next year, our Film Hill has begun its tour, following this year’s slogan “If film lovers cannot come to Film Hill, then Film Hill must come to them”. The first screening on the road took place in Split at the same time as the one in Motovun. Two more films will be shown there in the next couple of days.

The Istrian part of the tour begins this weekend and will last long into August, offering a very attractive program to audiences in a dozen towns. Dubrovnik will be able to enjoy Motovun Film Festival films for a whole week, from 1-7 August. Screenings in Šibenik, Rijeka, Kostrena and Karlovac are also scheduled for this month.

The preview screenings in Zagreb’s Tuškanac Open-air Theater will be taking place from 31 July to 3 August. Lauba Theater, another venue in the capital, will host the entire program of this festival edition between 26 August and 6 September. The award-winning ceremony will also take place there.