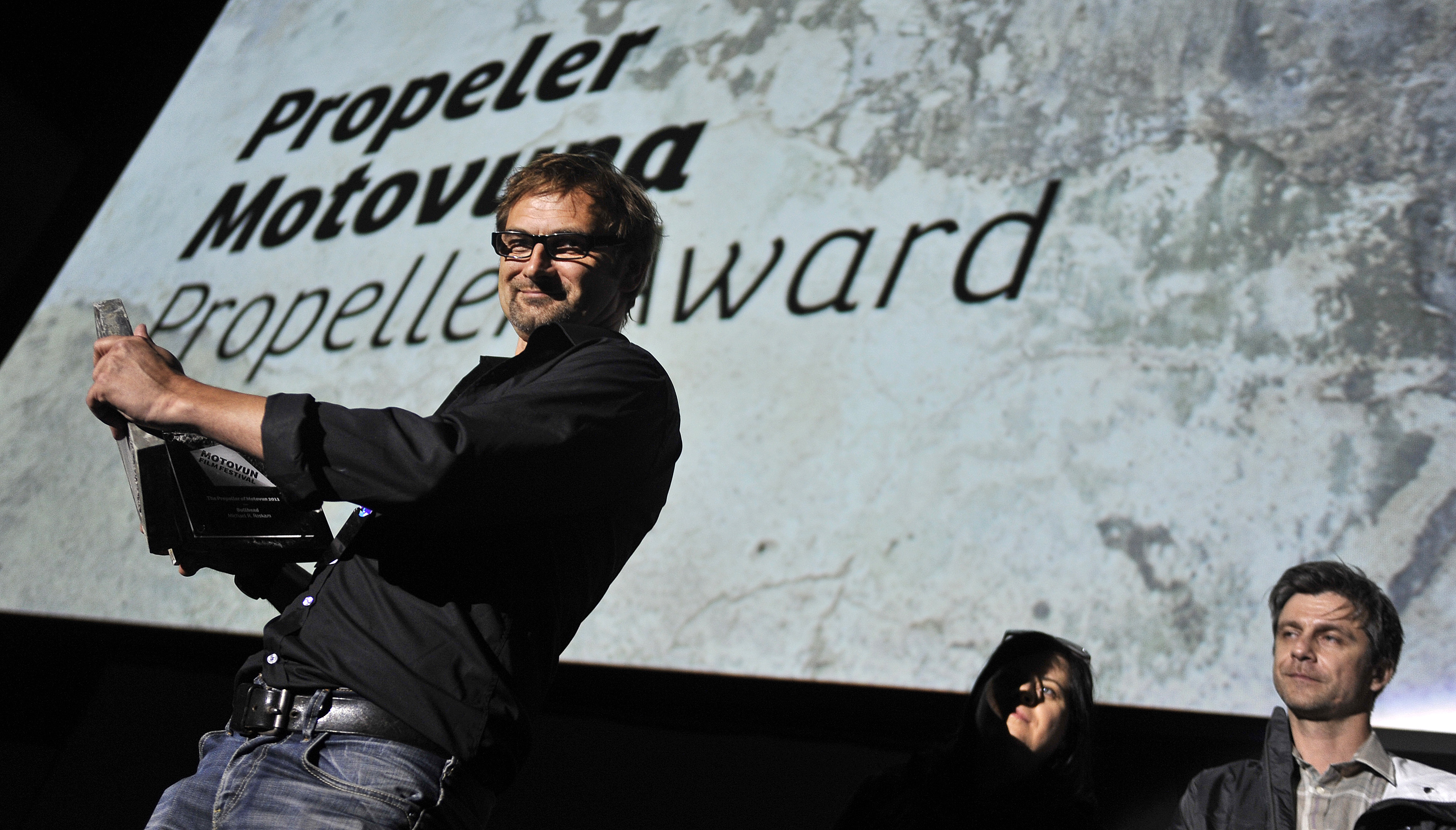 The evening started with rain, delaying the evening program by an hour, but that did not discourage Motovun audience, so cinema Trg could hardly seat all those wishing attend the screening of 'Perfect sense' directed by jury member David Mackenzie at 10 pm, and the awards ceremony afterward. The president of Croatia, Ivo Josipovic joined the audience, after socializing with visitors, and attending this year's partner country – Ireland’s dance workshop in the streets of Motovun.

The award ceremony began at midnight by announcing the winner of Corruption-Free Award, given to the film that best highlights the problem of corruption, in cooperation with Transparency International Croatia. The winner was Dimiar Mitovski’s "Mission London", while the award was presented to the novelist and screenwriter Alek Popov by Nikola Kristic, the president of Transparency International.

Motovun Shorts received 653 applications this year, and our selector Andrej Korovljev chose 24 titles to be screened at Motovun. The winner of €1000 worth prize sponsored by Iskon, was selected by last year's winner Chris Niemeyer, whose video message provoked laughter and approval of Motovun audience. Ending the speech with 'No sikiriki' Chris presented the best film of his choice to be ‘We're leaving’, directed by Zachary Treitz.

FIPRESCI Award, given for the eleventh time at MFF, was presented by a three-member international jury of film critics Aruna Vasudev, Maricke Nieuwdorp and Denis Valic, who were announced by festival’s the President of Council of Advisors – Mike Downey. The award went to the Mexican film "Martha" by Marcelino Islas Hernandez. ''I find it completely unbelievable that this little film reached Croatia and won an award, and I would like to thank the organizers, the jury and the audience,'' said visibly shaken director Hernández, addressing the audience in a video call.

“The film has been awarded for it’s beautiful and fragile way of telling the bittersweet story of getting older, dealing with loneliness, rejection and the need to have a family of your own. The jury applauds the delicate way Islas Hernández (1984) is showing the quiet struggle of the main character. His filmdebut is full of love and is never depending on false sentiments. With a perfectly dosed slow rhythm, beautiful colors and a strong and touching performance of Magda Vizcaino as Martha.”, the jury said.

Then came the award Bauer, three times more valuable this year, with €5000 cash prize, and post-production services in the amount of €10 000, given by our partner, the Slovenian company Teleking.

'Bauer Award jury members are happy to have 3 best finalists. All three films FATER, MOTHER OF ASPHALT AND TILVA ROSH show a high level of production and aesthetic achievement of authors in the region.

The majority of vote decided to give BAUER to TILVA ROSH by Nikola Ležaić – that illustrates growing up in the psychological and social vacuum of the society where the only sounds clear enough to be heard are screams of self-destruction. Through the blackness of ruined industry, shines the light of love and friendship, finding their own language in 'Tilva Rosh', in the most unexpected forms. Just as the systematic infliction of pain practiced by characters, Nikola Lezaic’s film is a document and testimony, protest and rebellion, formally fresh, inspiring narrative, ethically perfectly consistent at the same time.”, the jury explains their vote.

''The jury had a difficult task'' said Agnes Kocsis, ''having to choose the best among many great films. So the decision was to give special mention to 'Familiar Ground' by Stephane Lafleur, for its strong directorial style and original depiction of human relationships told with sensitivity, irony and visual humor.”

David MacKenzie announced ‘Bullhead’ by Michaël R. Roskam as the winner of Motovun Propeller for its powerful exploration of the disconnect between humanity and nature which works in a vivid metaphorical way – with a standout performance of growing vulnerability by its leading actor.

The award was received by the producer Bart Van Langendonck, who made a joke saying how after two days in Motovun he expected a Golden Truffle instead of Propeller.

''I have just spoken with the director of the film, who was very sorry he couldn’t be here with us, but he would like you to know that Croatia has a special place in his heart because the first film festival he ever participated in was – in Croatia . We are delighted with the award and would like to thank you from the bottom of our hearts!'', concluded Langendonck.