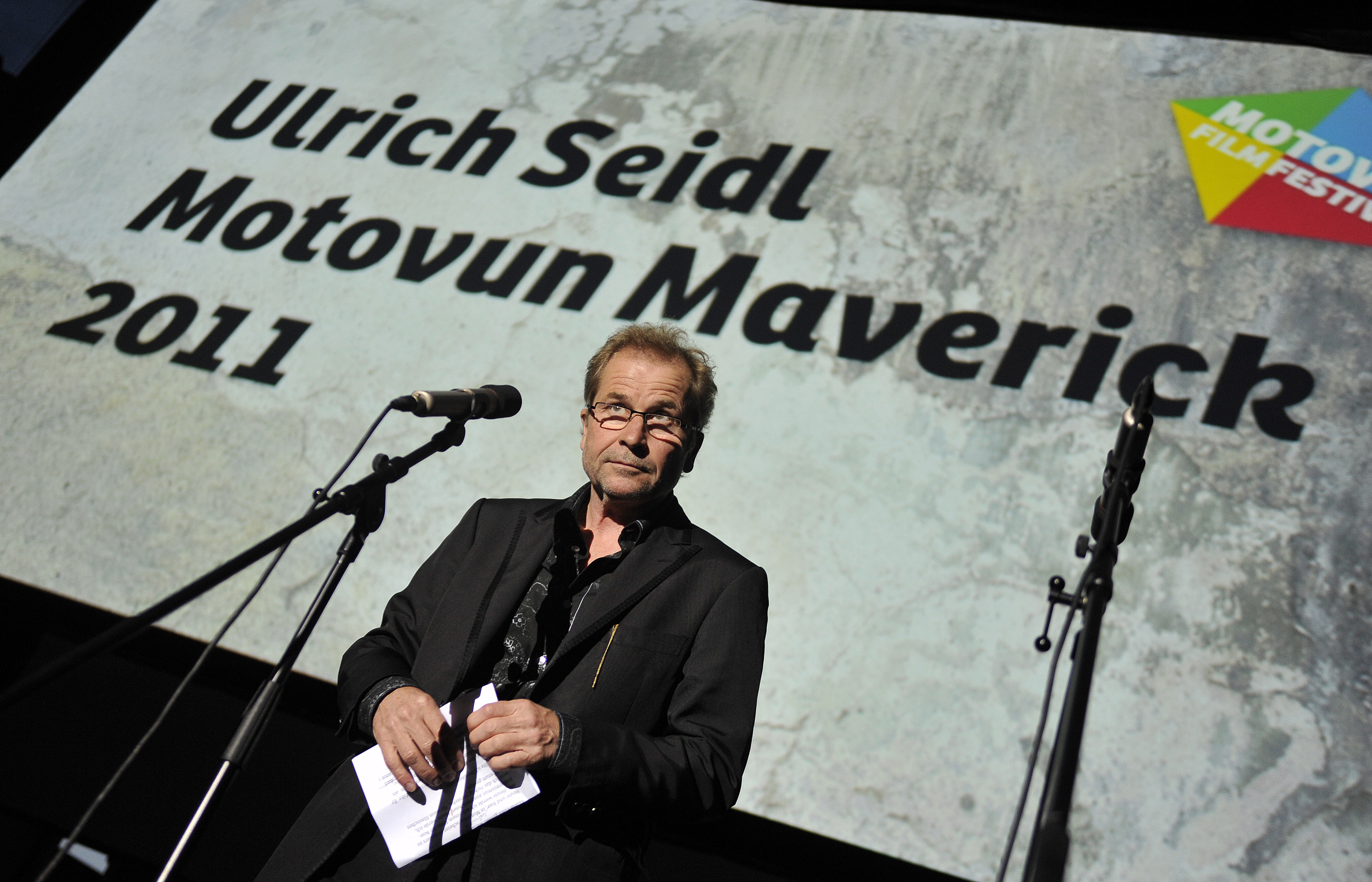 Controversial Austrian director, screenwriter, producer and – provocateur Ulrich Seidl, has received the Maverick Award tonight, intended for artists who are pushing the boundaries of film expression with their individuality, free spirit and innovation.

After Ken Russell (2008) and Terry Jones (2010), the third winner of this Motovun award that celebrates unconventionalityis the Austrian author Ulrich Seidl, who has completely erased the boundaries between documentary and feature film, fact and fiction, as well as generally accepted conventions of 'defined film genres'.

As part of the Motovun Film Festival program we have shown a mini-retrospect of Seidl's films, namely 'Dog Days'; 'Jesus, You Know'; 'Import Export'; 'The Bosom Friend' and 'Fun without Limits',with his banned one-minute film – 'Brother, Let Us Be Merry' was announced by Council of Advisors president Mike Downey and screened before the award ceremony.

''During the second edition of Motovun Film Festival, we started introducing Ulrich Seidl’s films to our audience and we are proud to have continued to this day. However, if you have only seen "Brother, Let us be Merry" you realize he is an author who has always swum against the tide, fighting for his right to be different in what we call film'', said festival director in honorable retirement, Rajko Grlić, before he presented the award to Ulrich Seidl.

After receiving the award Seidl said:

''I am very happy and pleased and feel honored to receive this award today in Motovun. Of course, it is always nice to receive awards, especially in this case, in the case of Motovun Maverick award, which is recognition of my film work. But every time I receive awards I wonder whether I had done anything wrong. I always wonder whether I have become a little less provocative, because – after all – I was given an award. But if I understand correctly, today you are awarding me for my film rebellion – therefore – everything is still alright. However, the nonconformity has its dangers, there is a trap where rebellion can become an end in itself. Rebellion should never be a filmmaker’s agenda. My agenda is – there’s no agenda. My agenda is simple – I look at the world. My films focus on the place we are reluctant to look at, where it hurts, where we don’t want to look in fear of discovering ourselves. I look at the privacy behind a facade, the everyday, as something normal, the hell of the normal – at something we are all familiar with, and I hope that this is always an unpleasant, disturbing and at best a lasting experience. I do not shoot weddings, and do not seek happiness, but I talk about people who do, trying to disturb with my films. So I see this award as an encouragement award, an incentive to continue with my film disturbing. Thank you!''

Seidl talked about his work and his films in more detail at Breakfast in Motovun on Wednesday. You can find the recording of the interview at http://soundcloud.com/motovunff/rsm-dorucak-u-motovunu-ulrich).

He used the opportunity to announce his latest project, still unfinished trilogy 'Paradise', which was originally meant to be one film with three intertwined stories, but it became three feature-length films.

''I didn't choose this career to make documentaries, but to make films. And I didn't want to be influenced by institutions, juries, awards…I wanted to have the best possible creative freedom. But it is always much easier getting funds to make documentary films. So I started making feature films with documentary film elements. This of course was very disturbing for all those who couldn't categorize the films, whether they were feature or documentary. ''

Ulrich Seidl was born in Vienna in 1952, and grew up in Horn in Lower Austria. While studying journalism, history of art and drama in Vienna, he supported himself by doing various jobs, before enrolling into the prestigious Film Academy Vienna at the age of 26.

He made his first film – documentary Einsvierzig in 1980, and after the controversy of his following film, Der Ball (1982) – a satirical portrait of a prom night in his home town – Seidl was kindly asked to – leave the Academy.

In 1990 he returned to the scene with his feature-length documentary Good News, and carried on making seven more film and television documentaries over the following ten years, which brought him many awards and acknowledgments.

His Mit Verlust ist zu rechnen / Loss Is to Be Expected won Special July Prize at Amsterdam IDF in 1993, and his film Models received Audience Award at Sarajevo Film Festival in 1999.

Hundstage / Dog Days, his first feature film, won Leone d’Oro at Venice Mostra in 2001, and it was screened in Motovun the following year.

After that Seidl made Zur Lage / State of the Nation, a critical view of Austria under the extreme rightwing coalition, with certain episodes directed by u Barbara Albert, Michael Glawogger and Michael Sturminger.

In 2003 he made his controversial film Jesus, You Know, which was awarded best feature-length documentary film at Festival Karlovy Vary, and screened as part of the MFF program in 2004.

Import Export is the first film Seidl both directed and produced. It was nominated for Cannes Palme d’Or in 2007.

“I don’t seek to entertain people with my films, but to touch them, perhaps even disturb them. My films are critical not of individual people but of society….I want the people in the theatre to be confronted with themselves.”, says Ulrich Seidl.